Loudon Wainwright III - I'd Rather Lead A Band - LP *NEW* 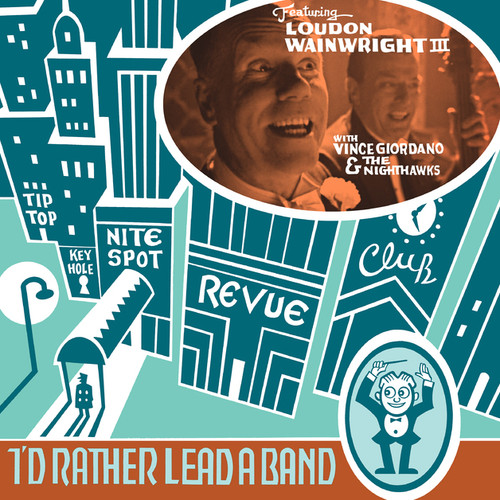 Loudon Wainwright III - I'd Rather Lead A Band - LP *NEW*

Loudon Wainwright III has unveiled his new album, I’d Rather Lead A Band (October 9/Thirty Tigers). A collaboration with Vince Giordano and his band The Nighthawks, and producer and music supervisor Randall Poster, the 14-song collection is a loose, fresh, and “anti-nostalgic” take on classic songs from the 1920s and ‘30s featuring Wainwright as singer and band leader.

For the past fifty years, Wainwright has carved out a distinguished career as one America’s most original singer-songwriters. Along the way he has released more than twenty albums, won a GRAMMY, acted in film and TV, and has had his songs recorded by artists including Johnny Cash, Mose Allison, Bonnie Raitt, and his own son, Rufus Wainwright.

Vince Giordano is a GRAMMY-winning bandleader and multi-instrumentalist, whose recent film and TV credits include The Irishman and The Marvelous Mrs. Maisel.

Randall Poster is a music supervisor and producer who has worked on all of Wes Anderson’s films, with directors Todd Phillips, Sam Mendes, Martin Scorsese, on HBO’s Vinyl and much more.

Track Listing:
SIDE A:
How I Love You (I'm Tellin' The Birds, Tellin' The Bees)
A Ship Without A Sail
Ain't Misbehavin'
I'm Going To Give It To Mary With Love
The Little Things In Life
So The Bluebirds And The Blackbirds Got Together
A Perfect Day
I Thought About You
I'd Rather Lead A Band
My Blue Heaven
Between The Devil And The Deep Blue Sea
Heart And Soul
You Rascal You (I'll Be Glad When You're Dead)
More I Cannot Wish You