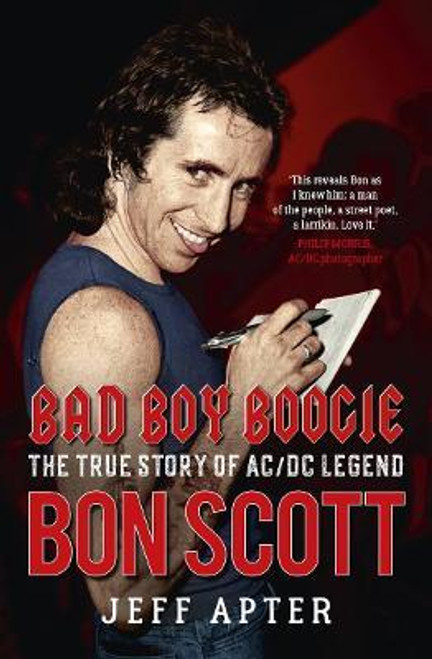 Description
Bon Scott was once asked if he was AC or DC. 'Neither,' he grinned, 'I'm the lightning flash in the middle.' And that's how he lived his life. No one had the same skill with lyrics as Bon, who called his words 'toilet poetry', his 'dirty ditties'. He could also vividly depict life on the road, best heard in the AC/DC classics 'Long Way to the Top' and 'Highway to Hell'. When Bon appeared on Countdown in March 1975, the impression he left was indelible. The ugliest schoolgirl to ever grace the small screen, Bon was a mess of tattoos and pigtails, wearing an awkwardly short skirt, all the while puffing on a ciggie. His bandmates, not just the audience, were in hysterics. The video quickly became part of Oz rock folklore. Bon was always the joker in the AC/DC pack. He'd happily pose for a photograph with a joint dangling from his lips or be interviewed in cut-off shorts with a banana provocatively stuffed into his waistband. Anything to elicit a laugh. The off-stage stories surrounding Bon are legendary. After spending a lively couple of days with Bon, Ol' 55 singer Jim Manzie said, 'My rock-and-roll education was pretty much complete.' Bad Boy Boogie is the first biography to focus on Bon's remarkable gifts as a lyricist, frontman and rascal. In short, the real Bon Scott.

Author Biography:
Jeff Apter is the author of more than 20 music biographies, many of them bestsellers. His subjects include Johnny O'Keefe, Keith Urban, John Farnham, the Bee Gees, the Finn brothers and Angus Young of AC/DC. As a ghostwriter, he has worked with Kasey Chambers, Mark Evans (of AC/DC) and Richard Clapton. Jeff was on staff at Rolling Stone for several years and has written about legends such as Aretha Franklin, Patti Smith, Robbie Robertson, Bob Dylan, Chrissie Hynde and Lucinda Williams. In 2015, he worked on the Helpmann award-nominated live show A State of Grace: The Music of Jeff and Tim Buckley. Away from music, Jeff has also worked on books with soldiers and diplomats and sports greats such as Michael Slater and Tim Cahill. He lives in Wollongong, New South Wales, with his wife, two children and a cat that's so damned cool it needs no name. www.jeffapter.com.au

The Story of Rock Board book - BOOK *NEW*

The Story of Rap Board book - BOOK *NEW*