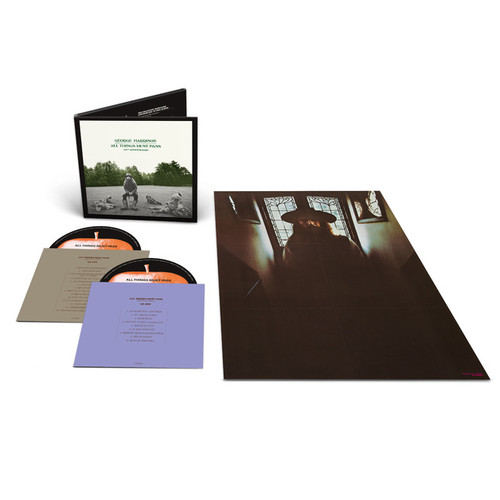 In celebration of the 50th Anniversary, George Harrison’s, All Things Must Pass, is being celebrated with a suite of new releases highlighted by a stunning new mix of the classic album by Grammy Award-winning mixer/engineer Paul Hicks, overseen by executive producer Dhani Harrison.

The standard 2CD features the new remix of the original album housed in a digipak.

Also included is an original poster with the back containing notes by Dhani Harrison and Paul Hicks about remixing the album.

Track Listing:
DISC 1:
I'd Have You Anytime
My Sweet Lord
Wah-Wah
Isn't It A Pity (Version One)
What Is Life
If Not For You
Behind That Locked Door
Let It Down
Run Of The Mill
DISC 2:
Beware Of Darkness
Apple Scruffs
Ballad Of Sir Frankie Crisp (Let It Roll)
Awaiting On You All
All Things Must Pass
I Dig Love
Art Of Dying
Isn't It A Pity (Version Two)
Hear Me Lord
Out Of The Blue
It's Johnny's Birthday
Plug Me In
I Remember Jeep
Thanks For The Pepperoni