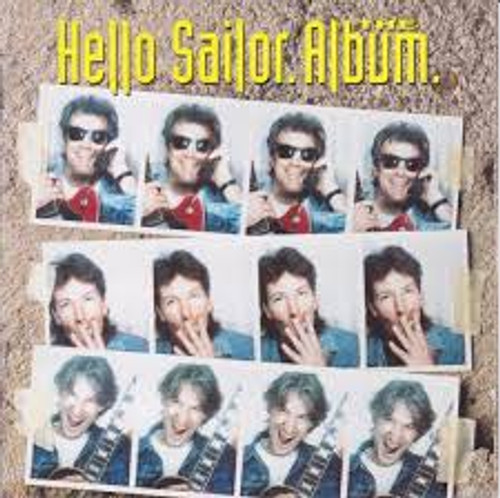 Hello Sailor’s 1994, The Album is to be re-released on 12” vinyl as a one off Vinyl pressing! The album was recorded over a three month period at York Street Studios and released in 1994. It contains the number five hit New Tattoo, other singles Never Fade Away, Stuck on You and Raging With the Storm, live favourites Please Tease Me and Bush By Where You Live, plus tracks that typify the strength of song writing people expect from Hello Sailor. The Album features the original Sailor line-up of Graham Brazier, Dave McArtney and Harry Lyon, along with a stellar line-up of guest musicians. Dave Dobbyn produced a couple of tracks and can be heard playing guitar and on backing vocals; Stuart Pearce plays keys and produced most of the tracks, Rick Ball and Gordon Joll share drumming duties. Tony Lumsden plays most of the bass parts but Neil Hannan makes an appearance; Hammond Gamble and Barry Saunders sing, Mike Farrell plays some stunning slide guitar; and Miguel Fuente contributes percussion while Grant (Yogi) Martin plays piano accordion. There’s even a string quartet on two tracks thrown in for good measure.

The Album was recorded beautifully through York Street’s Neve mixing desk onto 2” 24 track tape by engineer Paul Streekstra, who also mixed most of the tracks. Originally mastered at 301 Studios in Sydney, The Album has been re-mastered for vinyl and the songs promise to jump out of the grooves. The time constraints of 12” vinyl mean two songs are left off - Graham’s Easy and Harry’s Passion Play. Both will be available digitally, along with bonus tracks including such gems as a live Billy Bold, and Blue Lady recorded the last time Sailor played it at the legendary Gluepot.

The Album captures Hello Sailor at their mature best. It represents a time when Dave McArtney had returned from an extended stay in Europe, drawn back by a renewed interest in the band. A Legionnaires tour in 1993 testing the water convinced the band it was time to record a new Hello Sailor album and get back out on the road.